The Sony Tablet S has a variety of ways to interface with other devices and networks. I summarise these below.


Wireless: No device these days would be complete without at least some form of technology to connect to a network for Internet access and also to connect via TCP/IP to other devices. Connecting to a wireless network is a very simple task and vital to enable facilities such as installing “apps” and to install any available operating system or application software ‘updates’.
A couple of screen shots showing the Wireless facilities are shown below: 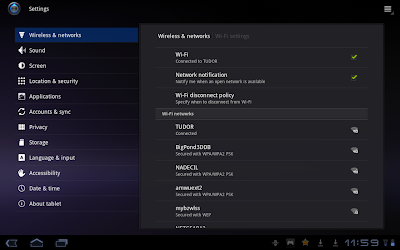 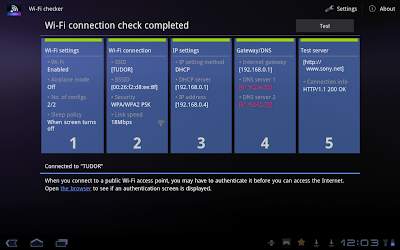 Infrared: A significant area of differentiation with other tablets is that the Sony has an infrared port. They have included a superb application that enables the control of devices such as television sets, hifi units etc that have infrared remote controls. This application includes two modes of operation, first by the typical on screen controls and also by the use of “gestures”. Neat. One disappointment though is that it seems that it is not possible to enable ‘macros’ to control more than one device simultaneously i.e to switch on or off all desired devices with one button or gesture. This is a bit of a pity, perhaps something like this will come later via an enhanced app from Sony or perhaps someone else may write one. This sort of thing is the real beauty of the Android world. 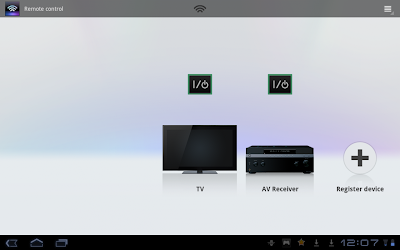 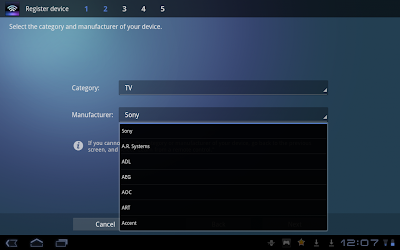 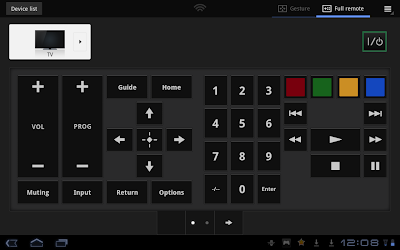 USB: The tablet has a micro USB 2 port. This enables easy connection to devices such as computers however only in ‘client’ or ‘slave’ mode. There is no USB host or “On The Go” capabilities i.e the tablet cannot take advantage of devices such as external hard drives. A real pity.


SD Card slot: Unlike the Apple iPad 2 or the Blackberry playbook, the Sony tablet S does have an SD card slot. This really is a major bonus point for me as this enables me to upload photos taken with my stills or video cameras in the field. A great way to check shots taken and also as a form of in the field backup.
DLNA: The Sony Tablet S is DLNA capable. This is one area that I am not all that familiar with. To be honest I had to look it up to find out more about it. The ability of the Sony Tablet S to “talk” or "throw" to my son’s Playstation and hopefully to his Bravia Sony TV should be an interesting area to explore with the Sony Tablet S.
In summary: Save for USB host capabilities, the Sony wants for little in the way of enabling communications with other devices.
Posted by Pete at 12:42 am